Here in this Sorrow 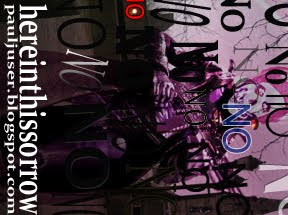 “Wheels” Trudgen
I made a lot of friends last year because I was the only freshman with a driver’s license and a car. As they got old enough to get licenses of their own, a lot of those friends faded away. Steve Valentine wasn’t one of them. To him, it was more like a bonding experience with us. He has that old junker Civic that he got from his mother that we are working on all the time. When we aren’t working on that, we’re touching up my car.

Steve and I are walking along the halls when we pass Neil Devlin. He used to be my best friend when we were little. I used to live three houses down from him, and we would play together all the time. I was a grade ahead of him though, so we didn’t see each other much in school. After I moved into town, we kind of drifted apart.

Steve and I are talking about my car. We are always talking about my car. Steve is in love with it. It’s a ‘92 Camaro that I got for $1000 at a police auction last year. The two of us have spent so many hours tinkering with that car. Sometimes, I think Steve would rather be with a car than a woman.

I have study hall first period in the cafeteria. Steve is procrastinating going to social studies. We pass Andy McCarthy, who I only know because my older sister, Kate, has had a crush on him for a couple years. He’s a senior, like her, but I think he’s kind of a dork anyway. He’s at a locker with that kid who always wears a trench coat, who we call “Death.” Taped up in Death’s locker is an upside down US flag, dozens of pictures of skulls, and stupid-looking punk rockers all covered with blood.

The gym is right next to the cafeteria, so we stop in to talk to Mr. Kazaminski, who goes to my church. He’s a really cool guy, and everyone likes him. Unfortunately, I’ve had that dyke, Ms. Aspling as my gym-teacher both years here. I heard someone say they saw her at the gay-bar downtown. I think that shit is disgusting, but John Boyd got suspended at the beginning of the year for a week for writing ‘carpet muncher’ on her office door, so the rest of us are careful to keep our mouths shut when she’s around.

Steve just stands there while I talk to Mr. Kazaminski. He rarely talks to anyone but me. He’s so shy and hard to get to know. I’ve known him since we were in cub scouts together, so we’re really close. Even at school though, he still only says a couple words to me.

While we are standing outside the cafeteria, the first bell rings. Steve is about to walk away when Jennie Dix and Shelly Marcone come out. Jennie has her brown hair pulled back in a pony-tail and is wearing one of those tight girly shirts and white pants that are so tight we can see the lines of her underwear through them. Shelly is wearing a paper-thin white blouse and a skirt just long enough to not get her in trouble. Steve stops and stares. He’s been talking about Jennie since last year, and it doesn’t seem like he’ll ever get over her. I’ve known Jennie for a long time, and keep asking if he wants me to hook him up. He’s too scared of her though. He says that she would never want to go out with him. She’s totally nice though, and I bet she would.

Go to Jennie Dix
Posted by Paul Juser at 3:14 PM