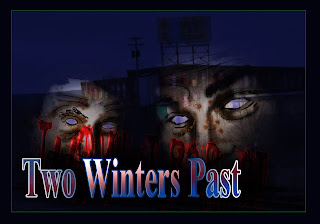 Helicopter shot over the forest along a winding country road. Trees line either side, their leafless bony branches thrust up to the sky. POPPER is OFF-SCREEN.

POPPER (OS): Keep moving brother, or we aren't going to make it!

Occasionally we pass a house. Windows are broken, doors hang on hinges. All look years from habitation. There is a gunshot, sharp, with an echo across the trees, then laughter.

Slow advance as a bridge comes into view. It is small, green copper supports with a wooden deck. The wooden planks are heavy and well worn.

POPPER (OS): Talk about luck, kid, Come on, before it runs out.

A man stands on the bridge. He is DOAN, skinny, with short brown hair. VALENTINE and POPPER are climbing up the bridge. DOAN helps with the last pull.

In the creek bed we see a dead MONSTER. The skull has been shattered by a gunshot, and the head is mostly blown apart. Monster wears little clothing, and that has been reduced to rags. The skin is pale, and covered with oozing boils.

Closeup of POPPER. He is smiling.

DOAN: Good to see you, Pop. We was starting to think you went over to the Cooleys for good.

DOAN: Who's this guy?

POPPER: We got trouble. I think there's going to be an attack.

DOAN: Let's get up to the house.

All run, POPPER leads. A little snow can still be seen in shadowy recesses of the forest, but most of the ground is covered with brown leaves and dead grass. A few trees have started to blossom.

POPPER: I killed Grant Cooley, but Remmy and John Chango followed us. They killed Hazard this morning.

DOAN: Hazard? How’d they get that old bird?

POPPER: Must have waited until the night watch left, got Hazard when he was sleeping.

DOAN: John Chango is down this way?

DOAN: Let me get my hands on Remmy Cooley.

They are running now.

POPPER: We haven’t seen Remmy yet, but Chango took a swing at us. They got guns. How long you been out here?

DOAN: I don’t know, a few hours? I haven’t seen hide nor hair.

POPPER: Remmy ain’t going to leave Chango where I left him. If it’s just the two of them, they’re gone.

DOAN: Why didn’t you kill Chango when you had the chance?

POPPER points his thumb at VALENTINE.

POPPER: Kid’s got a conscience.

DOAN: Fuck me. Kid, you got to lose that fast. What rock you crawl out of.

POPPER: Come out of Parlor City.

DOAN: I heard that rock was dead.